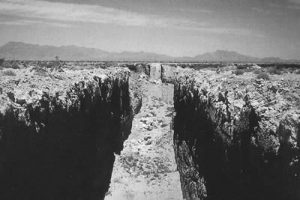 “There is nothing there, yet it is still a sculpture” -Michael HeizerDouble Negative is land art located in Moapa Valley on Mormon Mesa. It was conceived and designed by Artist Michael Heizer in 1969.

Under the direction of Heizer, 244,000 tons of rock, mostly rhyolit and sandstone, were displaced by local Bryant Robison and 2 of his helpers. This created 2 trenches that are each 30′ wide, 50′ deep, and 1500′ long. The excavated material was dumped into a natural canyon, and the two trenches straddle either side of this canyon. From Wikipedia: {The “negative” in the title thus refers in part to both thenatural and man-made negative space that constitutes the work. The work essentially consists of what isnot there, what has been displaced.}

The project was funded by Art Dealer Virginia Dwan, when she purchased the 60 acre site for Double Negative. Heizer then transferred property deeds to Dawn. The Dwan Gallery tried to sell the work in 1971, but Heizer stopped that from happening. Instead of selling it, Dwan donated Double Negative to the Museum of Contemporary Art in Los Angeles, in 1984. Included in the agreement between Heizer and the Museum is their agreement that they will not undertake any conservation of the piece, as Heizer wishes to have nature reclaim the land through weather and erosion.

Double Negative is located in Moapa Valley and can be accessed via unpaved and unimproved road, 4 wheel drive and/or off road vehicles are recommended. See below for more detailed directions.

Michael Heizer’s latest project is “City“, a project he has been working on since 1972. From Las Vegas Weekly: The work is a complex of minimalist, enormous abstract structures similar to ancient monuments and sites, stretching more than a mile and sealed off from the public by the very private artist living onsite with his wife. “City” is not yet available for viewing by the public.

LAND ART MOVEMENT
What exactly is Land Art, also called Earthworks? Basically, it is a form of art that is created outdoors IN nature, using natural materials such as rock, soil, logs, branches and water. Sometimes, other materials are introduced including concrete, metal, or asphalt. The art usually exists in remote locations not easily accessed by large numbers of people, and many of the earliest works were created in the deserts of Nevada, New Mexico, Utah and Arizona. Often, heavy earth moving equipment is used in the creation of the art.

At the end of the 1960’s in the US, land art started to emerge as an artistic protest against the perceived commercialization, artificiality and “plastic’ art forms. Promoters and creators of art did not believe that art should be limited to museums and galleries.

One of the best know Land Artist was Robert Smithson, who created the most well know piece of land art “Spiral Jetty”. This was constructed in 1970 on the northeastern shore of the Great Salt Lake in Utah, made up entirely of mud, salt crystals, basalt rocks, and water. Spiral Jetty is a counter clockwise coil that is 1,500′ long and 15′ wide. This land art is visible or hidden depending on the water level of the Great Salt Lake.

Land Art projects can be very costly, and most projects were funded by wealthy patrons and private foundations. In the mid 1970’s, the economic down turn reduced availability of those funds. And when Smithson died in 1973, the movement started to fade out.

LAND ARTISTS
It has been said that the Big Three of Land Art are Robert Smithson, Michael Heizer, and Walter Demaria, whose best known piece of work was The Lightning Field which consisted of 400 stainless steel posts arranged in a calculated grid over an area of 1 mile x 1 kim. This piece appears differently depending on the time of day and weather. It also lights up during thunderstorms.

In 2012, the Geffen Contemporary at the Museum of Contemporary Art presented an exhibit entitled “Ends of the Earth:Land Art to 1974“. It was the first large scale, historical thematic exhibition to deal broadly with Land Art.

Heizer chose not to participate in the exhibit, as he felt that photos and/or video were not good representations of his piece, which is best experienced in person.

GETTING TO DOUBLE NEGATIVE

Part of the beauty of earthworks lies in their natural surroundings. Please do not disturb the desert ecosystem found around Double Negative. The surrounding area is public land belonging to the Bureau of Reclamation or the Bureau of Land Management. Collecting or distrubing plants, fossils, or artifacts on this land is prohibited. Information for these directions was obtained from the Museum of Contemporary Art Double Negative Webpage.

The Moapa Valley Revitalization Project (MVRP) is a 501(c) non-profit organization founded in 2013 and based in Moapa Valley, Nevada.